# What is Vue Storefront Middleware and why we need it?

The Vue Storefront middleware is an Express proxy that takes the requests from the front-end, translates them to a given integration, and calls related API-client.

We have implemented it for a variety of reasons.

First of all, it allows us to provide a proven way of extensibility. As a developer, you have control of the requests and responses in the given platform with extensions)

All platform credentials are stored only on the server side and not exposed to the frontend part of your application.

Performance optimizations - since we moved the networking layer to the server-side, the final code shipped to the browser is way smaller, which impacts the initial loading time.

# How it works (in a nutshell)

The way it works represents the following diagram:

The API-client is being called only on the middleware, but you still can access it on the front-end side - how is that possible?

When you access an API-client on the front-end side, you are accessing actually a stub, instead of a real API-client instance. This stub makes a call to the middleware (Remote Procedure Call (opens new window)), and asks for loading a specific integration and executing a function you are asking for.

For example, the following code:

Generates the request to our middleware:

Middleware reads tag name of integration and the function name that needs to be called, executes it, and sends a response back to the browser as if it was transferred using a direct connection.

When it comes to configuration, middleware has a dedicated config called middleware.config.js that contains a section with integrations(integrations) along with their credentials and other options.

Each entry under the integrations section starts with a tag name of given integration, and contains an object with the following fields: 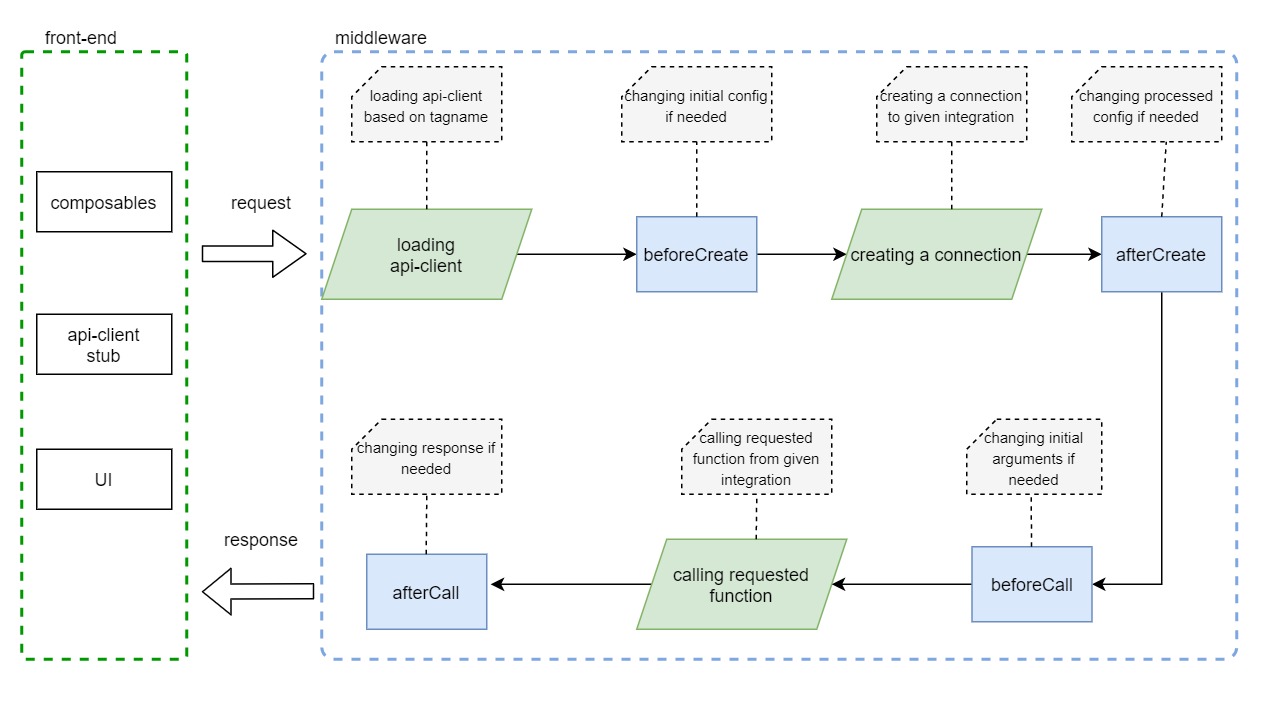 Middleware allows you to inject into the lifecycle of the entire network flow, starting with configuring a connection and ending with a final response. To use those things, we created an extension feature.

You can define as many extensions as you want. Remember they are always correlated with a specific API-client (integration). How do they look like? Each extension has the following structure:

To register a created extension, we have to add it do the middleware config file:

By default, Vue Storefront middleware is running within the Nuxt.js process. Sometimes there is a need to disconnect it from the app and run it as a separate and independent instance (process).

Since it's just an Express application, you can do this, by creating a middleware.js file:

Now, when you run this using Node, your middleware should work separately.

Additionally, you need to remove the middleware module entry from the nuxt.config.js and configure the domain, where your middleware is settled.